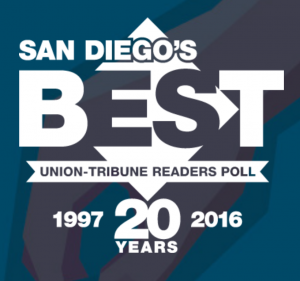 Dallo Law Group is proud to announce being named as one of the best tax law firms in the San Diego area, according to The San Diego Union-Tribune Readers Poll.   This noteworthy title has been given to us for the past three consecutive years, and we are deeply grateful to all the community members that voted and gave us this recognition.

Because it is important to Dallo Law Group to be engaged and proactive in its vibrant San Diego community, we especially appreciate this support. Our office is located in downtown San Diego, where we have a dedicated and knowledgeable staff that works exclusively on tax resolution issues. Our attorneys have the skills as both CPAs and lawyers, which make them thoroughly capable to provide the energy and sophistication to get their clients to the most favorable outcomes.

Besides running a productive tax law practice, founding attorney, Michael Dallo, is ever passionate to be involved with community members in the San Diego district. His reach out efforts include many speaking engagements, participation in forums as a guest speaker, and at the University of San Diego where he tries to inform and educate the local public through presentations and seminars. The areas of tax and law can change from time to time which makes it essential to keep up.   Finally, Michael contributes advice on local San Diego radio and is endorsed by Carl DeMaio, a leading San Diego political analyst, on AM600 KOGO.

Once again, all the staff members at Dallo Law Group would like to express our thanks for being chosen as one of San Diego’s Best Tax Law Firms in 2016 by the readers of the San Diego Union-Tribune. We remain committed to the community and our profession and look forward to the future together.